…or how not to use strong verbs 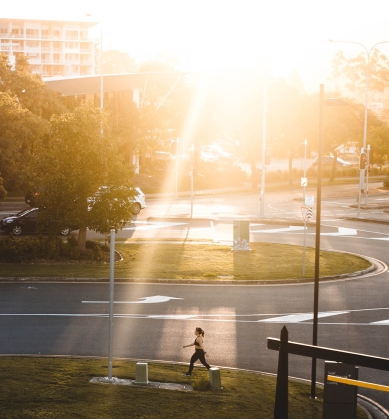 “Use strong verbs” is common writing advice. Instead of “it was cold,” write “he shivered.” Instead of “she went quickly up the stairs,” write, “she dashed up the stairs.” Strong verbs drive the point straight home, without distracting adverbs or limp forms of the verb to be.

The internet teems with strong-verb lists that promise to “supercharge” your writing. Great! you think. I want to supercharge my writing! So you go through your story in progress and you find a new verb for every “is,” “has,” and “goes.”

Let’s say your character, Danae, is walking down a road on a sunny day. Your original description reads, “The sun was shining fiercely.” No good, you think. That “was” has got to go. And the adverb, too, now that I look at it. You consider writing “The sun beat down.” It’s definitely a more vivid description than what you had, but on the other hand, it’s been done a thousand times. You want something original, something creative. “The sun flung itself onto the city,” you write. “Its rays smothered Danae with heat.” How’s that for strong verbs! you gloat.

But your editor will tell you that, unfortunately, you have not succeeded in supercharging your writing as promised. The problem is that the strong verb makes the sun stand out in a scene that’s supposed to be about Danae. If you’re also using strong verbs for Danae’s actions, those verbs have to compete for attention against the sun flinging itself around, and the reader’s attention is split.

Even in the midst of an action sequence, misused strong verbs can divert the reader’s focus away from what’s important. Let’s say Danae gets assaulted in an alleyway and has the air knocked out of her. Trying to avoid a passive construction, you write, “the air escaped from her lungs.” This phrase is certainly active. But it shifts the focus from Danae to the air. The reader stops to wonder how long the air plotted before it made its getaway. What kind of torment did it suffer while it was trapped in those grim, dark lungs?

Because escaping and flinging are not usual actions for air and sun, using those verbs has the effect of personifying their subjects. I learned about personification when I was eleven and studying The Hobbit in creative writing class. J.R.R. Tolkien personifies the Misty Mountains by saying, “The great mountains had marched down very near to them…”  As I learned then, personification emphasizes the importance of an object or a landscape by turning it for a moment (or more) into a character in the story.

The air in Danae’s lungs is not an important player in her assault scene. The sun doesn’t merit a verb like “fling” unless Danae is fighting to survive in a blistering desert. Sometimes it’s OK to use a passive construction. If you’re trying to strengthen weak sentences, turn the focus back to the central players in the scene. Have Danae plunge into the sun’s heat, or scurry down the street with her scarf over her face, or plod along with her head bowed against the force of the sun. In these sentences, we learn about the sun and about Danae.

Like any powerful tool, strong verbs are best used with care and intention. So when you write or revise, identify what in each scene you want to draw attention to, and put your strongest, most creative verbs there. And for goodness’ sake, if you find the air in anyone’s lungs escaping, don’t let it get away!