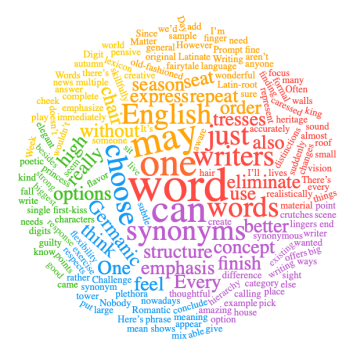 If you had to eliminate one word or phrase from the English language, what would it be? Why?

One of the wonderful things about English is how many words it has. With its mix of Germanic and Latinate heritage, it offers multiple options for almost every concept. Here’s a small sample:

Nor is there only one option in each category — besides finish, for example, we also have the Latin-root conclude and complete.

For writers, this plethora of synonyms is good news. All these options give English an amazing creative flexibility. We can repeat a concept without having to repeat a word. We can choose a word not just for its meaning but also for its sound. And we can play with the fine distinctions between synonyms.

A writer needs to be able to choose skillfully. Digit may be synonymous with finger in some respects, but that doesn’t mean it will work to write “she caressed his cheek with her digits” in your first-kiss scene.

There’s a subtle difference between chair and seat — a king may sit on a high seat, but better not put him in a high chair. The season autumn has a more poetic, elegant feel than the season fall.

Often there’s a hierarchy to synonyms that we aren’t immediately aware of. One may be more general than the other: A house is a kind of structure, sure, but calling the place you live a structure changes the emphasis — suddenly we focus on the material of the walls and roof rather than on who lives there. Or one synonym may have a more formal or old-fashioned feel than the other: think tresses for hair. Nobody nowadays has tresses; the word lingers in our lexicon with a strong flavor of a fairytale princess in a tower.

Since the point of this exercise is to choose a word to eliminate, I’ll pick really. It’s one of the biggest crutches in writing, a word we use to add emphasis without having to think (and it shows). I know I’m just as guilty of it as anyone else. But we’d all really be better off finding more original ways to emphasize our points.